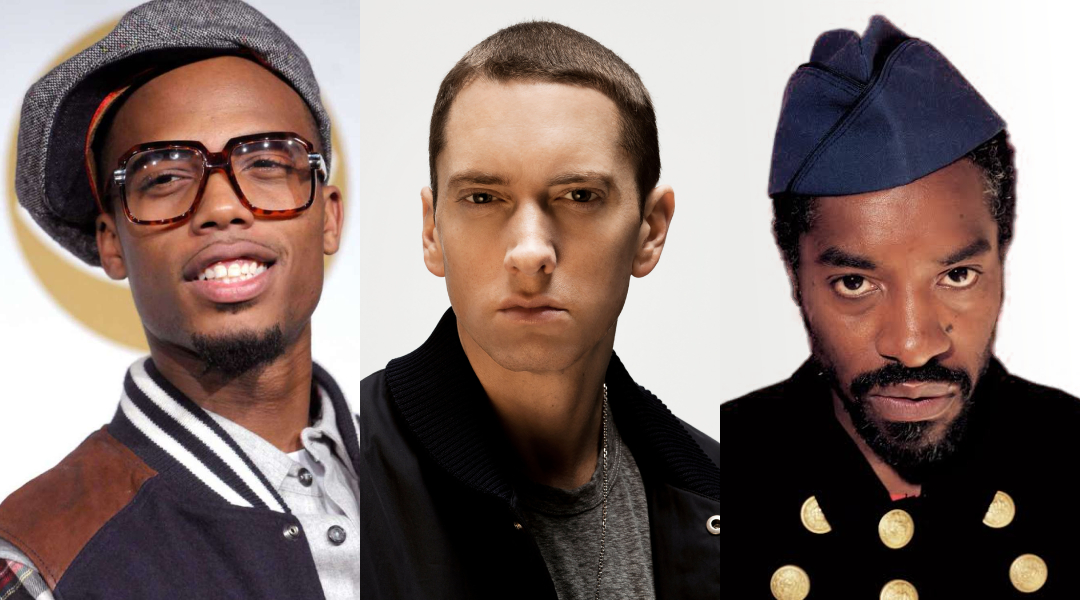 Eminem holds Andre 3000 in high regard, and B.o.B. grew up listening to Eminem. It all came full circle when B.o.B. showed Em a feature he managed to land.

Back in the day, artists used to come together in the studio to work, not just send over a recorded verse. They would spend time together, talk, play each other records, get to know each other better and learn from each other. B.o.B. shared a story from the olden days on B High TV:

I remember when I was in the studio with Eminem, and I played Eminem “Play the Guitar”. I remember Em being like, “Shit, you just never know where he’s gonna land at!” I know what he meant when he said that because, first of all, you gotta put this in perspective. I grew up listening to Eminem. This nigga was like… he was that nigga, you know what I’m saying! We are in a politically correct society now, so you can’t be Eminem now. But he was that nigga, and I was watching him listen to Andre 3000 verse on my song! And he was like, “Oh man, you never know where he’s gonna land with the flow”. And I’, just like, yo, this is wild to me. But I know what he meant by that. The approach that I’m talking about. The way Andre approaches verses — he’s like a journalist, he’s like a storyteller. And he does the same thing you see in battle rap or metaphor rap that makes you go, “Ooooh!” He’s able to do that just from talking from his perspective, And you’ll be like, “Damn! I never thought about it”.

B.o.B. has been lucky with his features and managed to work with so many highest-tier rappers. Andre 3000 gave a verse to “Play the Guitar”, Tech N9ne collaborated with him on multiple occasions, there is his verse on a Slaughterhouse joint for “Welcome to Our House”, and, of course, “Airplanes, Pt. 2” with Marshall.