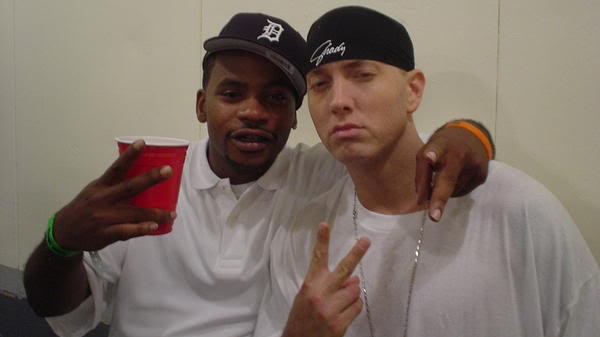 Nick Cannon keeps sending insults left and right and while Em is staying focused on his work his friends and colleagues make occasional shots back.

So did Obie Trice annoyed with recent Cannon’s implications that Eminem is a white master to his mates. To respond he released his second “SpankyHayes2”.

On one of his verse he raps:

…bitch, like you got skills
Fathom to fuck with Mathers
Or sabotage the video he shootin’ with Joey Crack?

It can only mean that Eminem will appear on video for “Lord Above” and for this news only we should be grateful to Obie Trice. However, his diss is solid and worth listening.

Listen to it and read the lyrics below:

[Intro]
Ayo, what’s up man?
This your mans Obie Trice
Push “Like” on the channel, subscribe to the channel
Spanky Hayes 2
Let’s go!

[Verse]
Tired of these fake niggas, flake niggas
Niggas in the hood need a break, nigga!
You’s a thespian first
Beth Gardner gave your bitch-ass birth
What was wrong with her?
Who put the worm in her?
Who bust sperm in her?
Beth should’ve murdered ya!
Planned Parenthood, apparently she thought her heir was good
But your parent didn’t process it like she should
You read scripts, nigga
We flip scripts, nigga
We bust *clips*, nigga
You’s a rich nigga, stay in your lane
Don’t let this beef shit interfere with your fame
Detroit City detrimental to the brain
We don’t fuck with you lames, y’all fuck up the game
Y’all suffocate everything real
Then put your twist on it, bitch, like you got skills
Fathom to fuck with Mathers
Or sabotage the video he shootin’ with Joey Crack?
I’m comin’ to California with me and a bunch of crackers
And they gon’ ask “Who is that nigga up on that nag?”
And this ain’t ’bout slave masters or nothin’ that’s white and black
If you fuckin’ over my family, I’m puttin’ you all in caskets
The Picatinny rail doin’ the blastin’
After the aftermath, they askin, “What the fuck happened, Nicholas?”

[Outro]
Ay, stick to the script, nigga, stick to the funny shit
Take care of my nigga Spanky Hayes, man, he a Detroit nigga
Niggas come from that block for real, man, like
Fuck all that Hollywood shit
*Em, em, em, em!*
Shady 1.0, nigga
Shady for life
Don’t act like The Fifth ain’t in stores, nigga, The Fifth out now!
Obie Trice, bitch!
What up, Suge?
Callin’ that nigga the new 2Pac, man
You in that bitch eatin’ too many trays
Motherfuckin’ kidney beans and rice
Fucked you up, my nigga
Nigga ain’t nowhere near 2Pac!