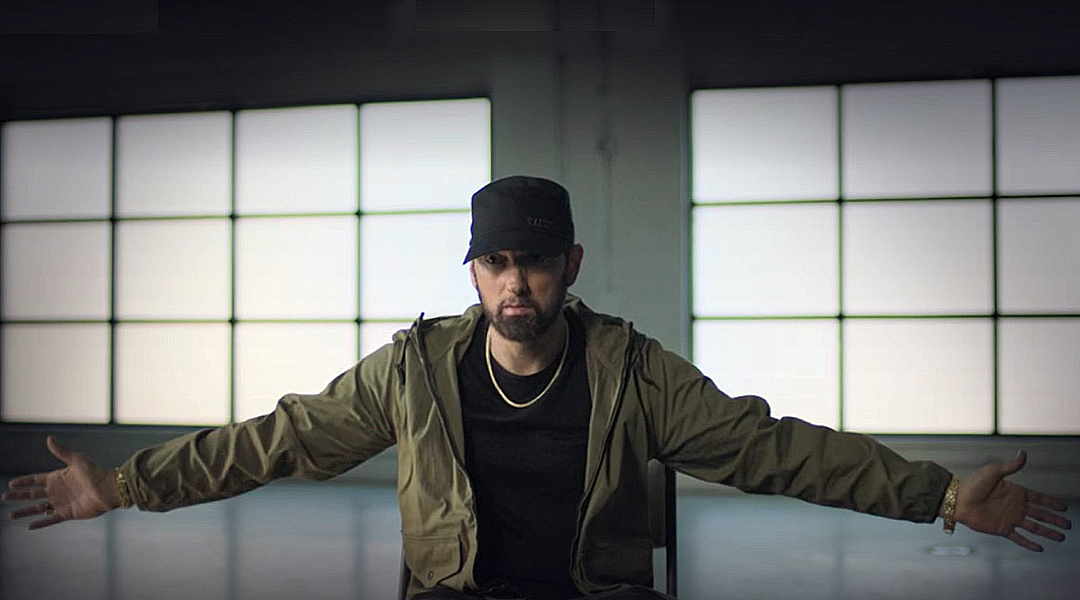 In his freshly released new four-part BBC documentary “Fight the Power: How Hip Hop Changed the World” Public Enemy’s Chuck D, who also executive produced the show, calls hip-hop a “collective movement”, not just a music genre. And Eminem has his own important part to play in the movement, as evident from the part dedicated exclusively to Em.

Rap stars, journalists, and a university professor talked about Marshall’s impact on the culture, and Eminem himself shared some thoughts about what was driving him and some key moments of his career.

The big segment about Marshall comes up in Ep. 4 and opens with the outline of public resistance to the war that George Bush Jr started in the Middle East. Reacting to the situation and following his own beliefs, Eminem released a video criticising Bush’s policy and the US invasion of Iraq. He even gave an interview explaining his motivation behind this loud statement of defiance. And it is included in the documentary:

I have reached the point where I feel like I’ll be a real let-down for me and my friends if I don’t speak on what I felt from the heart. America is the best place to live. I feel like we live in the best country to live in, there is supposed to be freedom of speech. And we’ve got troops overseas and they are dying. Let’s get that dude out of office because if not he’s gonna spend another four years driving our country into the ground.

Eminem became a lightning rod for those in control of society. He wanted to poke fun at the facade of the hypocrisy of America.

Now, real Slim Shady enters the scene and sits down for the interview, bracing himself with a quiet “Oh, boy”. But his mood shifts as soon as he starts talking about his main passion, hip hop:

When I was a kid I just loved hip hop. I would just take another rappers’ beats and loop them on a cassette tape and make raps. Just lil’ old me. When all these millions of people were listening to me it was crazy to watch this whole thing, like, people were tripping ‘cause I said that? It made me realise that hip hop is having this effect on me but it’s having this effect on millions of other people too.

Sway Calloway, who gave Marshall a platform in his radios studio where Em spit one of his impressive freestyles, attracting the attention of Dr. Dre, steps in:

Eminem was a dope rapper. I first met Eminem right after he won the Rap Olympics. He became popular purely because of his talent and his skill set. And the fact that he was a white guy that was outrapping everybody at that time.

Killer Mike, a rapper and a social and political activist, sees Eminem not only as a talented rapper but as a pioneer who opened hip hop for a whole new demographic:

You can’t talking about Eminem without talking about Dr. Dre. Dr. Dre foresaw N.W.A. and helped create what the gangsta music was. But he also understood that game needed changing. What Dr. Dre recognised in Eminem was that there is a place for poor white people to have say in this culture.

Professor Marcus Reeves notes that being white Eminem might have had more freedom but he used his racial privilege to challenge the system:

Marshall agrees that for him rap was not as much as entertainment than an honest account of the state of affairs:

As a kid, you’d see MTV raps and you’d see somebody like Ice Cube saying that “This is we’re basically reporting to you what’s happening on the streets where we live”. And I was seeing what was going on in the neighbourhoods where I lived.

Rodney Carmichael, hip hop journalist, also points out that Em brought to the table a perspective unique to that era of hip hop:

He’s a white kid out of Detroit. He was able to reflect on white America in a way that even Black artists couldn’t.

KRS-One, one of those rappers who inspired Eminem, remembers how honest and personal Em’s early material was, how it provided a glimpse into the world usually not advertised as an American dream:

Listening to Eminem’s early stuff, what was going on internally in a white home. He’s writing this up, he’s telling you, “That’s my struggle”.

Killer Mike understands that including Eminem and white people’s experience in the culture brought unity, not division:

What Em showed a bigger world was to unite people, to understand that everyone suffers undeservingly. He participated in the culture he loved and he brought a new audience with him.

But of course, not only early Em’s material was politically and socially charged. Four years of Trump’s administration have exacerbated many festering societal problems, and Marshall once again felt that he should not keep his position neutral. He dropped one of the most politically charged freestyles of his career, “Storm”, condemning Trump, his politics, and his morals, and calling his fans to take a side. Eminem says:

At that moment he divided the country. Some of the things that were coming out of his mouth!.. I don’t know. It was getting me angry. You need to be aware of your platform. Sometimes you might need to take a stand and say certain things. I felt like, I wanna take this opportunity to let people who don’t know what I’m about to understand: this is why I’m saying this. This is what I felt I need to say right now. I wanted to make it so that there was no doubt.

Eminem is a truth-teller at his core. That’s why he’s a great hip hop artist. He knows that there is a lot of overlap between his fanbase and Trump’s. Which to me is why his call out of his fans is so significant.

Marshall confirms that the shrinking of his fanbase has never been a concern for him:

If it’s gonna divide my fanbase then so be it. You might divide some people but you’re also can bring so many people together. And maybe I can take this opportunity and this platform I get to be somebody who could inspire change.

The power of rap has brought so many people together. So many different nationalities, so many people from all backgrounds and I don’t know if that happens without hip hop.

Eminem also commented on some burning political questions and the Public Enemy legacy in Ep.2, “Under Siege”, explaining how hip hop shaped his worldview:

When Chuck was, like, “Elvis was a hero to most but he never meant shit to me. Racist, the sucker was simple and plain”, I was, like, “You what?!” You know what I’m saying? Because that’s where I’m getting my education from.

But one of Em’s most memorable lines from this documentary addresses the relationship between artists and any hostile power that tries to turn their own art against them:

I know rappers will always be attacked by politicians though. A lot of it was just to push buttons regardless. And for you to take a lot of these lyrics seriously is like, you’re a fucking idiot.