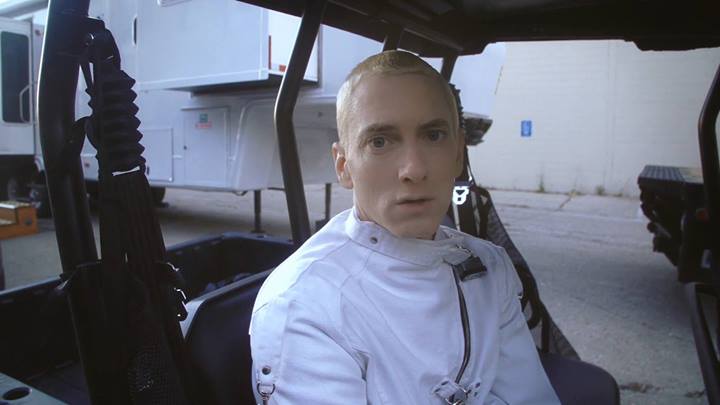 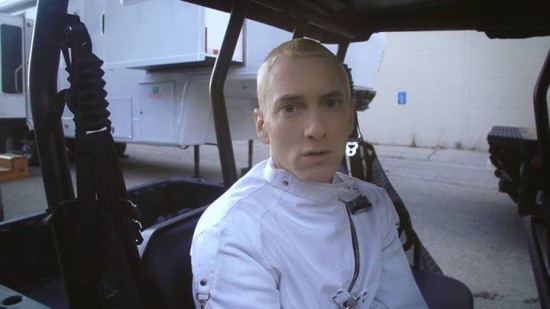 Go Behind The Scenes Of Rihanna And Eminem’s ‘Monster’. Ever wonder what Slim Shady’s voicemail sounds like? He shows us.

Eminem has a ton of unforgettable moments, even if Slim Shady himself has forgotten them. Luckily for Marshall, his “Monster” video with Rihanna jogged his memory— or so you would think.

“I had to go home and get my strait jacket,” Eminem says to camera in a “Monster” behind-the-scenes video on Thursday (April 3).

The strait jacket that Em refers to is the same to the one he wore in 1999 classic vid for “My Name Is” —either that or it’s very similar.

“Redoing this scene actually brings back no memories for me because I don’t remember it,” he says with a straight face and dead pan voice.

In the BTS piece, Em’s manager Paul Rosenberg leaves the rapper a voicemail, explaining the concept behind the “Monster” vid. If you are one of the 131 million people who watched the video on YouTube since its released in December, then you know that Rihanna plays therapist as Em revisits classic moments in his life as a super star.

Most of the clip is a retread of what we already know, but we do see and hear some pretty cool things. For starters, if you ever get the chance to leave a message for Em on his cell phone you will hear: “You have reached the voicemail box of: Suck It.”

We don’t get to see him interact much with Rihanna, whom he will partner up with for a tour later this summer, but we do get to see him make a hilarious Elton John impression.