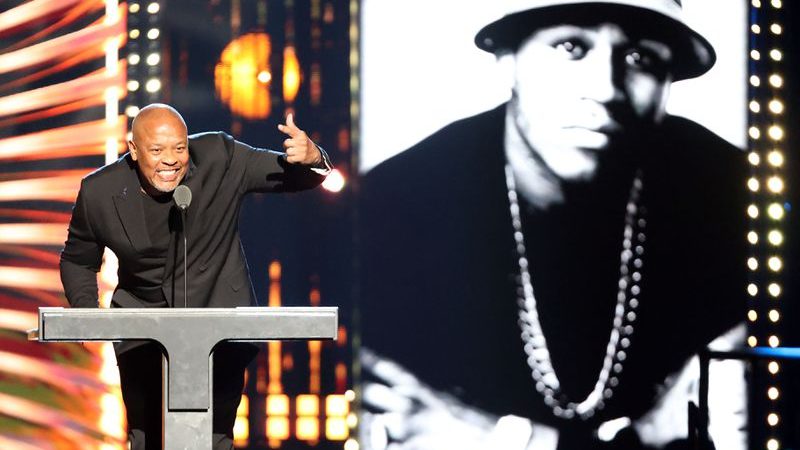 Dr. Dre gave a brilliant speech at LL Cool J’s induction ceremony, talking about how LL inspired him and sharing stories about creating music on a boat together.

The Good Doctor has seen so many brilliant artists in hip hop and has so many stories to tell. His speech was personal and appealing to universal experience at the same time, and LL seemed to enjoy it a lot.

Here it is in full:

So what does LL really stand for? Ladies Love? Lickin’ Lips? Well, I’m here because I’m personally making space for “Living Legend.” OK, I’m gonna take you back for a minute. Do you remember a story you told me about leaving Def Jam? You were the first artist on Def Jam. You recorded all of this music and delivered all of these albums. Then fast forward to this: your deal is up, and you told me you were really expecting a really dope parting gift. Do you remember what you told me you got? A cheap watch. Right. I mean, what is that? But now I guess you know what time it is, right?

The folks at Def Jam probably could have done better with their parting gift, but they knew exactly what they were doing when they signed you as their very first act. LL was 17 years old when his debut album came out, and it not only put Def Jam on the map, but it launched a fucking superstar. That first song, “I Need a Beat.” Yeah, I remember that. It was just him and a drum beat — no other music. Now I’m a producer, and I’m not sure how many of you know how difficult that is to get across and how difficult that is to make it happen. It was amazing. Now, whenever I hear the first album, “Radio”, it immediately transports me back to when I was just getting started as a DJ behind the turntables. I started off practising mixing and scratching “Rock the Bells” in my garage. And then I took that shit to the club and watched the club go crazy. Really.

LL Cool J gave us 13 studio albums over three decades. And when I reflect on his legacy, the first thing I think about is his incredible range. He went from the sonic brutality of “Mama Said Knock You Out” to a silky ballad like “I Need Love,” and also smooth R&B and pop-influenced songs “Around the Way, Girl,” “Doin’ It,” “Going Back to Cali. … I don’t think so”. Is that what you said? “Going back to Cali… I don’t think so,” right? You know that old hip hop term, right? It ain’t where you from, it’s where you at. Where do you live now, LL? California. Well, I’m here to show you some California love.

LL’s body of work is some of the most diverse hip hop has ever seen. He became rap’s first pop superstar while staying true to his roots representing Queens, New York. The second thing I think about this is remarkable longevity. Now I’ve been doing this for 35 years, and I’ve seen artists come and go. They get one or two hits, and then they’re gone. They disappear. But LL’s longevity is unparalleled in hip hop.

He’s hit that unique space that crosses and bridges generations, the rare artist beloved by you, your mama and all of your kids all at once. How about that? How many artists in the rap game are relevant after 30 years?

Now what I’ve admired most about L is his willingness to push the boundaries of what is poss0ible in hip hop. He’s never been afraid to take risks to evolve his career and, by doing so, reminding the rest of us of our own potential. He’s an author, Grammys host, radio DJ, businessman, philanthropist, and Kennedy Center honoree. How about this. Most of you don’t know this, but LL Cool J termed the phrase G.O.A.T., the “Greatest of All Time.” Yes. He’s the one who actually came up with that phrase. How about that?

Now he’s been a devoted husband to his beautiful wife Simone and the father of their four children. Now, me and him had a chance to spend some time in the studio, and through our collaboration, a friendship was born. I’m not bragging and shit like that, but I was out on the boat on the Mediterranean. And L hit me up like, “Yo, what’s up?”. I’m like, “I’m on the Mediterranean. I got a studio on the boat. What’s up?” And two days later, he and his wife Simone showed up on the boat. It was only supposed to be for three days or something like that, but it ended up being like a week or so out on the water. Our families got to hang out, and we experienced a lot more than music. It was beautiful.

We know more than most how inspirational trauma can be. And when it comes to having trauma in your life, because you’ve lost it. It builds something inside of you. It creates a certain hunger and determination that makes her life meaningful to make your life stand out above the rest. If you’re lucky, you’re able to use that trauma to propel your life forward. If you’re L, you’re able to turn that trauma into an art form that makes everybody pay attention.

So L, that part of the gift that you got. It was just a placeholder for tonight. Something bigger was always in store to celebrate you, my man. So here’s a look at my man LL Cool J’s extraordinary life and his journey and the reason why we’re here tonight.

Snoop Dogg Planning to Have Dr. Dre’s Back at Super Bowl and On His New Record