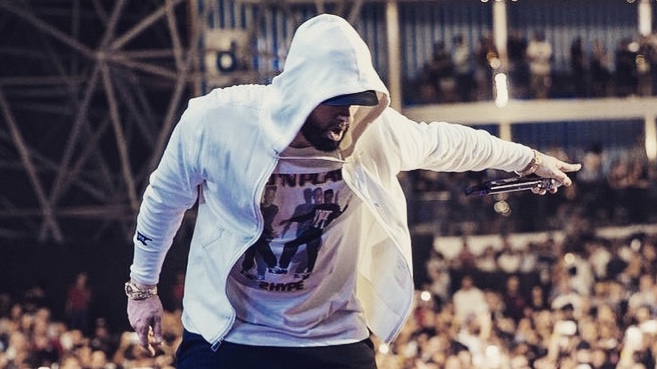 This is an official statement made by a FLASH Entertainment manager. And this is what happened at Eminem’s show in Abu Dhabi: disgusting unprofessionalism in organising a massive show, aggression and negligence towards fans and artists.

Yesterday early morning (around 3-5 am) the ePro team and about 50 fans arrived to Du Arena to secure their place in the queue for Eminem’s show. We set up an orderly queue where every fan had their own number on a specially printed fan card, agreed with the fans on rules and procedures of venue access, confirmed that all interactions were based on mutual respect between the fans. We wanted all the fans to get to the venue safely, without accidents and stress, we want them first and foremost to enjoy the show. For many of them that was their first Eminem’s show they came to see and that was their dream coming true. That dream was ruined by FLASH Entertainment and the security company they hired – G4S Security – that failed to act professionally.

More than 300 fans self-organised in a formal queue, they were enjoying the quiet time and used it to know each other better, while patiently waiting for gates to open.

At 4pm the G4S Security team arrived together with a FLASH Entertainment manager. They started moving people away from the gates using physical force. They didn’t pay attention to the fact that there was already no space to move, they kept pushing people into the crowd that had been packed already, in the afternoon heat of one of the hottest countries in the world. “Don’t care” was the motto of this company on the day of this show. Or maybe ever.

We referred our concerns to the FLASH Entertainment manager, inquiring why they were disrupting the well organised queue and behaving aggressively towards the fans. Their response was: “It’s impossible to organize such a big crowd, we don’t care if you run, it’s up to you”. Damn, everything was organised already. They did not give a shit about people, about our safety, our well-being, anything. They only cared about the money they had got from ticket sales.

For the organisers of the show of one of the most famous artists you were behaving unprofessionally and your attitude towards members of the audience who came from all over the world was below adequate. We have paid for the most expensive tickets, but we have only got a disgusting level of service and awful experience. At one point the staff, unable to control the situation in the venue, decided to make an impression producing truncheons. What the fuck were you going to do with them? Beat the girls at the front of the queue who could not step back because of people behind them? Who gave you the right to behave like this, you complete morons?

We were forced to spend an hour cornered in the dense crowd by FLASH Entertainment staff. It seemed like they did not understand what they were supposed to do and why they were there. They were not able to deal even with standard issues. For instance, somebody from the audience complained to the member of staff about cigarette smoke that caused them respiratory problems. This member of staff just said that he did not care. He did not even try to resolve the situation. We asked the person who was smoking to stop, and he stopped, that was not that difficult. This is a standard situation the staff should know how to deal with.

Truncheons and neglect were not the only issues fans had to face. Organising the event in one of the hottest countries on the planet, FLASH Entertainment did not bother to provide water to fans in a way it is usually organised at such events. Just imagine: 35 degrees centigrade, unbearable heat, tens of thousands people are locked in a dense crowd and there is no water because it was confiscated at the entry gates. How do you like it? After 30 minutes people started fainting of dehydration, they were evacuated from the crowd. After an hour dozens of fans fell victims of dehydration and exhaustion. People were begging for water, but FLASH Entertainment just shrugged it off, stating that there was no water. We could not get water at the place, we could not leave the place to get water. Ironically, venue staff was provided with water and they were not shy to drink it in front of the parched audience.

You know what was even more ironic in this shitty situation? This circus was sponsored by Lay’s, Pepsi and Du. Pepsi especially should be ashamed of being involved in this. The company producing soft drinks sponsored the event where tens of thousands of people were deprived of water and were fainting of dehydration. You should think twice before working with FLASH Entertainment again.

Is that all? No. Because of all this unprofessionalism and incompetence, the show was significantly delayed. According to information from the stage crew, the possibility of the cancellation of the show was real. Apparently, at 9 pm when the show was supposed to get started there were still thousands of fans outside of the arena who could not get through the entrance gates. This demonstrates an absolutely appalling level of incompetence of the FLASH Entertainment staff in all aspects from organising access to the venue to security checks to scanning tickets.

The show was delayed for an hour, but Eminem, of course, saved the day. No matter what happened, no matter how difficult it was before the show, he came on stage and brought what the fans expected from him – a brilliant performance. However, we know Eminem’s show very well, we know his setlist, know how he carries himself, what he does, how he performs. This time something was off. There were some technical glitches with his in-ear monitor and with his mic that resulted in the first ever slip up in the supersonic speed part of “Rap God”. In general, there was a feeling that he was not satisfied with the situation and it definitely influenced his performance. This might not be obvious for everyone, but those who have seen him enough times could see the difference.

In recent years I have been to more than a hundred concerts all over the world from small gigs of local acts to shows of the most best-selling artists, including several Eminem’s shows in different countries. This experience allows me to form and express my competent opinion on what was going on at Du Arena. I have never faced the shit I have seen at the event organised by FLASH Entertainment. This Abu Dhabi show is the worst organised event I have been to, and only because of Eminem’s talent we were able to forget this mess and seize the night.

FLASH Entertainment keeps pretending that everything is fine, that everybody is happy. They post photos on social media with cheerful captions, describing their success in putting up an “amazing show”. But if you open the comment section in any of these posts you will see many and many Eminem’s fans leaving angry comments and describing the way the show was organised as “the worst” and “awful”. And I can relate to the anger and disappointment of people whose night was ruined by this company.

Many people on social media started blaming Eminem for the badly organised show, which is not fair. This is absolutely not his fault. He came on stage and delivered, he gave 100 percent.